The Connect Chat scenario block connects a chat to the destination specified in the $(destination) variable (typically, the agent found by the preceding Find Agent block or to the specified chat scenario entry). If the agent is logged in, the system tracks the agent’s state according to the state of the interaction. The block handles the call transfers and conferences internally and only ends when the remote party disconnects or the last agent disconnects.

The Connect Chat block may take one of the following conditional exits: No Answer or Target Disconnected.

The chat request is submitted to the agent, but the agent does not answer within the No Answer Timeout.

The chat request is answered by the agent and eventually, the call is terminated from the agent side. Target Disconnected could be used as a conditional exit, for example, for customer surveys when an agent disconnects first and a customer survey flow starts from this conditional exit. In the event of agent connection loss during a chat with a customer, a variable, $(targetDisconnectedCause), also supplies the agent disconnect reason. This variable informs the chat scenario of which side has disconnected and gives an option to continue the conversation using the chat scenario or another agent.

In the image shown, a Set Variable block has been added to the chat scenario, and its name has been set to "Target Disconnected." It appears in the scenario with the following properties. 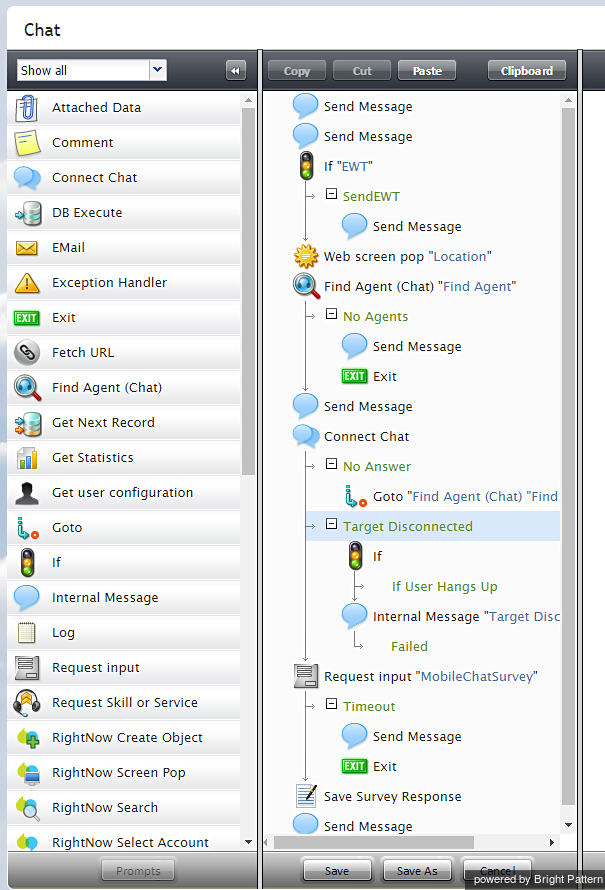 The If and Internal Message blocks beneath the Target Disconnected variable provide additional uses for the variable.

If the user hangs up, the Target Disconnected variable provides the reason (i.e., the cause) for the disconnected chat and provides an avenue to continue the conversation. 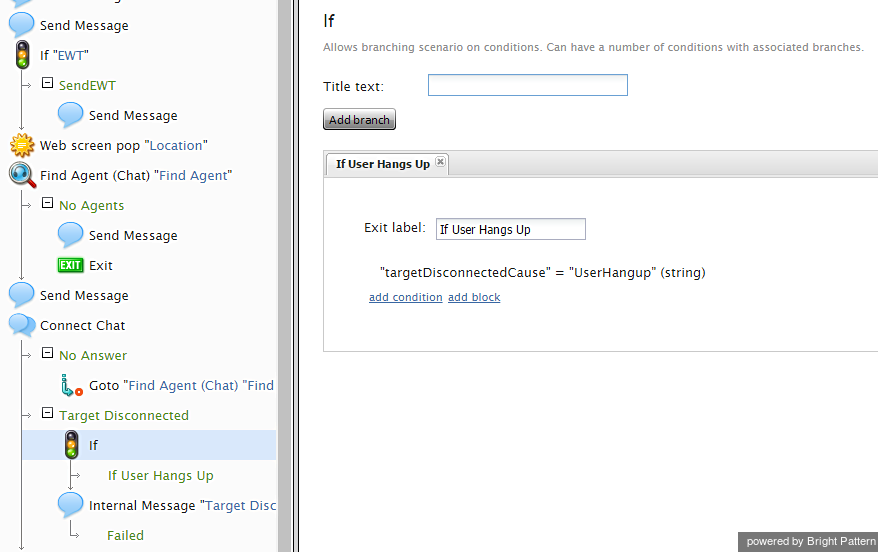 An internal message is sent to a specific agent or representative (if a user name is entered), and the variable is given in the message.

This tells the agent that the chat has been disconnected, and why. This message is not visible to customers. 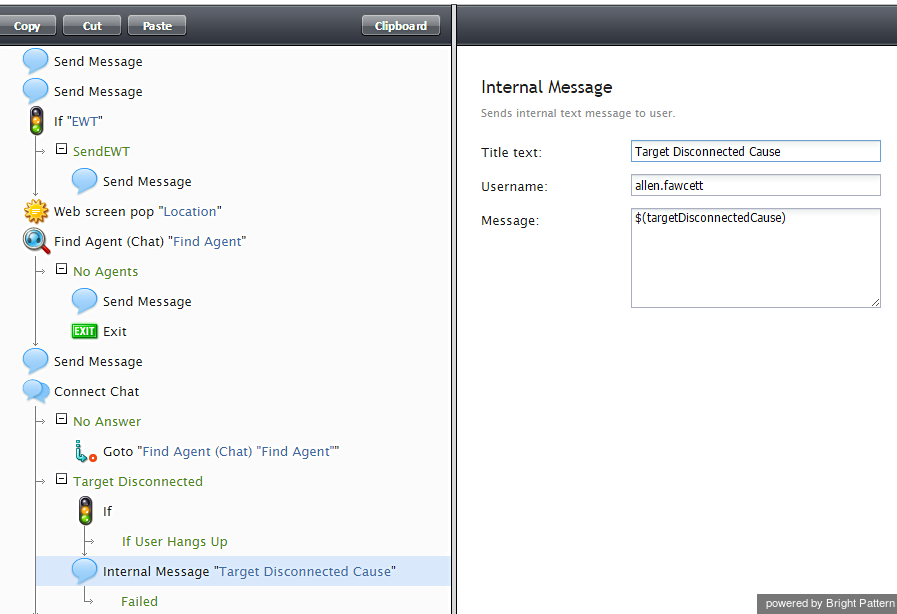 In the following example scenario, the Target Disconnected variable is used with an If block to discover why the chat was disconnected. The title of the If block is Check reason, the exit label is Network Failure, and the variable is "targetDisconnectedCause" = "userLogout". In this instance, the variable equals the string "userLogout" in order to inform the scenario that if the chat disconnected due to a network failure, the cause must be that the user logged out. 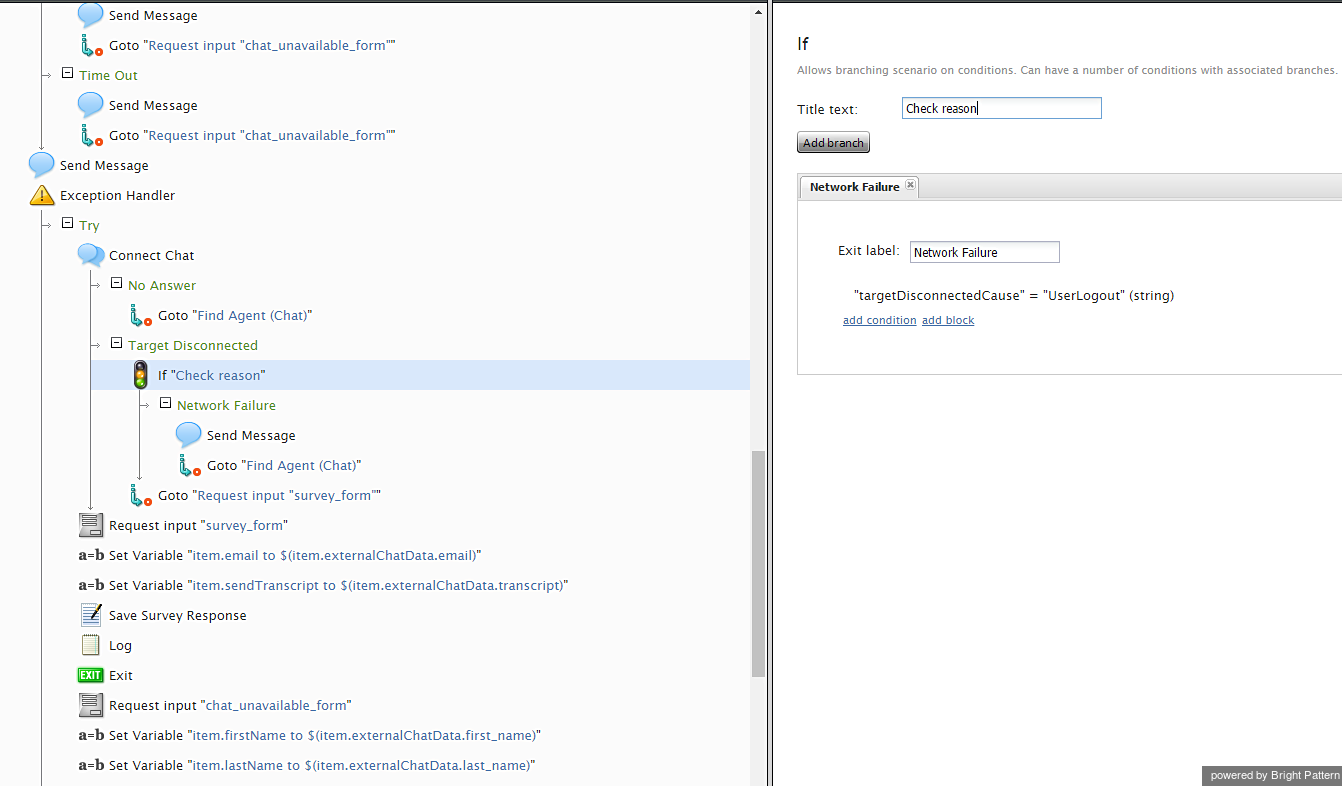 The next branch in the scenario is Network Failure followed by Send Message. This sends an automated message to the customer to inform the customer that the chat was disconnected and will resume when another agent is available. The scenario then proceeds with Goto "Find Agent (Chat)" to find the next available agent to handle the chat.

Settings, also known as configuration attributes, for this block appear in the Edit pane on the right when the block is added to the flowchart or selected within the flowchart. These settings specify the function represented by the block, and they are described as follows.

Default Destination is the default chat scenario entry to which the chat will be connected if no agents were found by the preceding Find Agent block to serve this interaction.

Override Destination is the chat scenario entry to which the chat will be connected is this parameter, as specified. If this field has a value, the scenario ignores the agent found by the preceding Find Agent block.

Mark all interactions connected by this block as overflow

If selected, all chats connected via this block will be marked for reporting purposes as chats made to overflow destinations.

No Answer Timeout is the number of seconds the scenario waits for a destination to answer the call before executing the No Answer conditional exit. The default is 10 seconds.

This represents the number of seconds that the scenario waits before the chat request is auto-answered. If you do not use auto-answer, leave this field empty.

HTML code defines the page that will be presented to the customer when agent accepts the chat request. 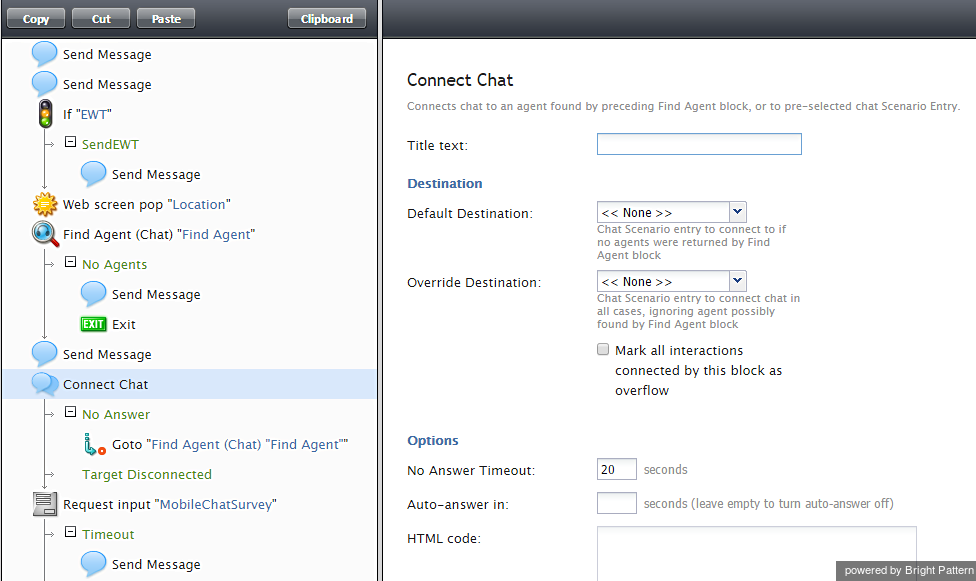 < Previous | Next >
Retrieved from "https://help.brightpattern.com/index.php?title=5.8:Scenario-builder-reference-guide/ScenarioBlocks/ConnectChat&oldid=92017"
ask community about this topic