A branch can include one or more logical expressions (conditions), where each condition verifies one of the following:

Use the Add branch button to add a branch corresponding to the desired conditional exit.

Provide a label that will identify the corresponding conditional exit in the flowchart. 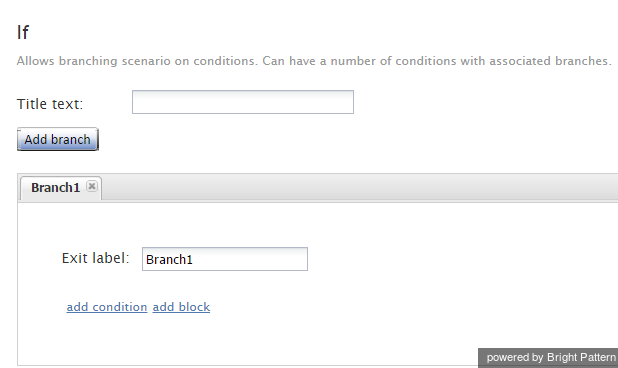 Click a conditional branch of an IF block in the scenario flowchart to display exit labels and conditional blocks or the options to add a condition or block display in the edit pane.

Add more branches as described. (There is a limit of 20 branches per If block.)

The Callback condition is used to check if the caller has already scheduled a return call in a virtual queue scenario.

The Current date and time condition is used to check the interaction arrival time against the Hours of Operation (HOP) specified in the associated scenario entry, as illustrated in the [[]Scenario-builder-reference-guide/ScenarioExample | Scenario Example.]]

The Estimated Waiting Time condition is used to determine further processing of the interaction based on the time that the given interaction is likely to wait in the service queue before it can be delivered to an agent. (The estimated waiting time condition related to the Virtual Queue function is defined in the Find Agent block.)

The Scenario variable (HOP) condition is used to check the interaction arrival time against any other HOP defined as a scenario parameter.