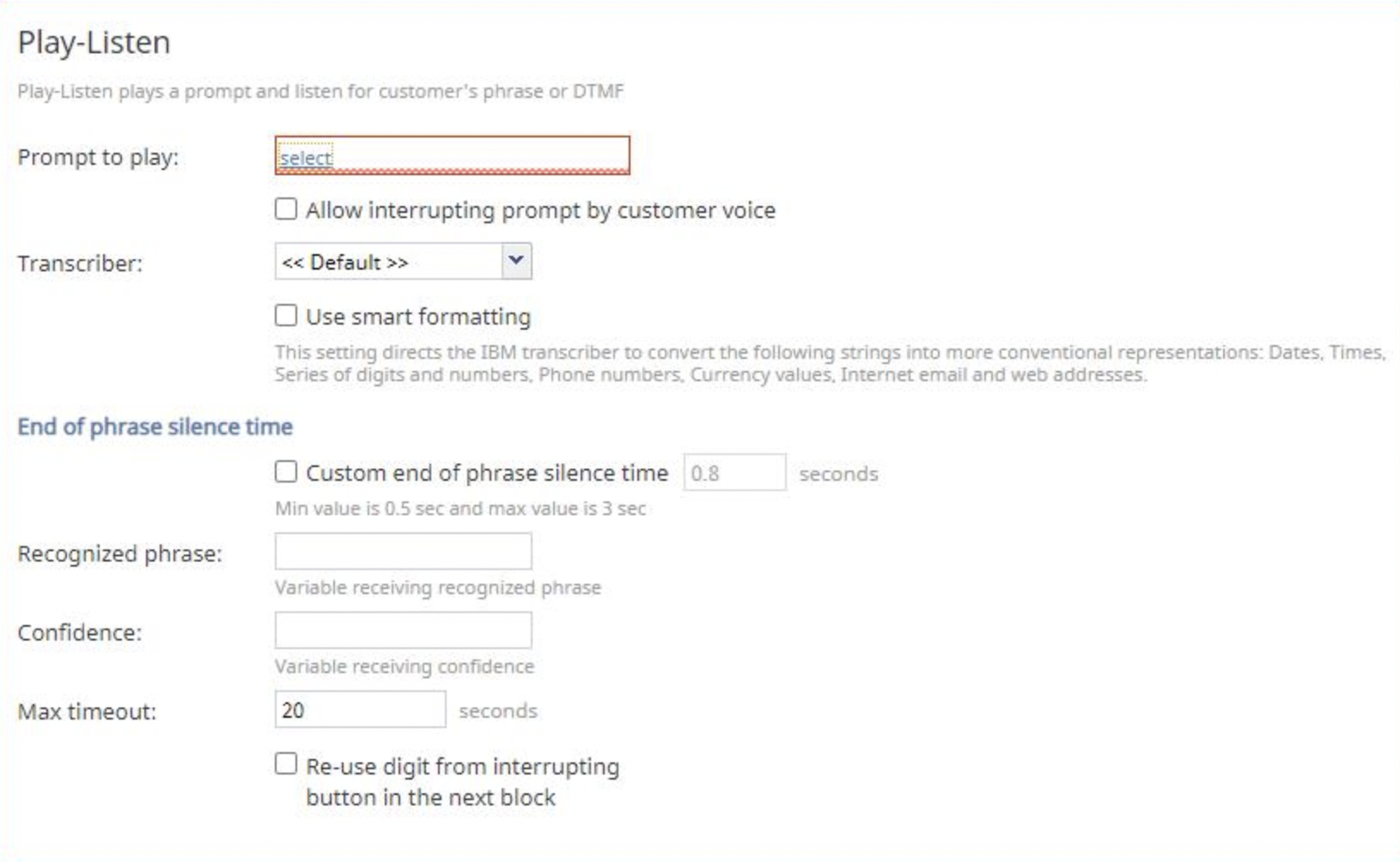 When this checkbox is enabled, if the Play-Listen block detects that a caller is talking at any point while the configured prompt is playing, the prompt will be interrupted; this means the prompt may be interrupted as soon as it begins playing. Note that this setting is unchecked by default and affects the Max timeout setting whether it is checked or unchecked.

Enabling this checkbox may be useful as a subsequent Menu block does not require a second input and a subsequent Collect Digits block no longer requires variable concatenation (i.e., starting from Bright Pattern Contact Center version 5.5.5).

If your contact center uses IBM Watson STT or Google synchronous STT as the transcriber, this setting allows you to configure a specific amount of time (in seconds) that the system waits at the end of a detected spoken sound before exiting the block. The minimum configurable value is 0.5 seconds, the maximum configurable value is 3 seconds, and the default value is 0.8 seconds. Configuring this setting can be useful for contact centers that require customers to read out long strings of digits and/or letters. Note that the sound detection does not apply to DTMF tones.

If your contact center uses Google synchronous STT as the transcriber, this field allows you to define the speechContexts parameter; it may improve transcription results for numeric conversion by using the speech adaptation feature (e.g., automatically converting the word “eight” into the digit “8”). The acceptable value in this field is a JSON array of Google SpeechContexts, for example:

If your contact center uses IBM Watson STT as the transcriber, enabling the Use smart formatting checkbox allows the conversion of certain strings into more conventional representations (e.g., automatically converting the word “eight” into the digit “8”). Automatically converted strings include the following: dates, times, a string of digits and numbers, phone numbers, currency values, internet email and web addresses, and so forth.

This setting determines the total amount of time, in seconds, that the scenario waits before having the Play-Listen block take the Timeout conditional exit; the default value is 20 seconds. Max timeout is measured from the point when the prompt is ended or interrupted by the customer if it is allowed.

Re-use digit from interrupting button in the next block

If the DTMF conditional exit is taken (i.e., DTMF is received as an input), and this checkbox is enabled, the received DTMF code is saved in the buffer and may be used in a subsequent Menu or Collect Digits block.

Dual-tone multi-frequency (DTMF) refers to telephone touch-tones. If the Play-Listen block detects that the caller is transmitting numeric information (numbers from 0 to 9, as well as symbols # and *) on the phone, it will take the DTMF exit, running through the scenario as specified. Note that when a customer is speaking, if they press a DTMF key, this exit will be taken.

When a DTMF key is pressed, the first DMTF entry will populate the $(playListenDTMF) variable.