From Bright Pattern Documentation
< 5.8:Scenario-builder-reference-guide‎ | ScenarioBlocks
Jump to: navigation, search
This page contains changes which are not marked for translation.
• 5.8

The Switch scenario block allows you to create branches and alter control flow for your scenario based on specific variable values.

The block functions in the following way:

The Default conditional exit is taken if the defined variable’s value is not explicitly defined in the Values setting.

The Variable to test field is where to enter the name of the variable (e.g., var1 and not $(var1)).

The Variable value fields allow you to define a known possible value of the entered variable.

The Exit label is the name of the branch’s exit. 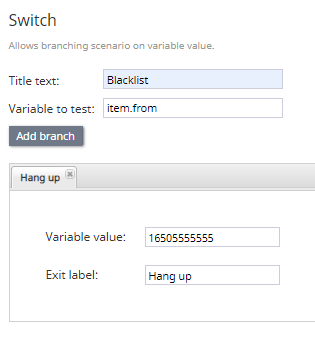