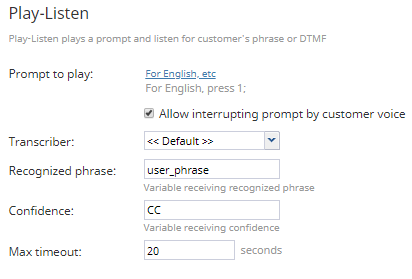 When this checkbox is enabled, if the Play-Listen block detects that a caller is talking while the configured prompt is playing, the prompt will be interrupted. Note that this setting is unchecked by default.

The default value is 20 seconds. When the max timeout is reached, the scenario will exit the Play-Listen block using the Timeout conditional exit (see below).

Dual-tone multi-frequency (DTMF) refers to telephone touch-tones. If the Play-Listen block detects that the caller is transmitting numeric information (numbers from 0 to 9, as well as symbols # and *) on the phone, it will take the DTMF exit, running through the scenario as specified.

Retrieved from "https://help.brightpattern.com/index.php?title=5.3:Scenario-builder-reference-guide/ScenarioBlocks/PlayListen&oldid=117019"
ask community about this topic