From Bright Pattern Documentation
< 5.8:Contact-center-administrator-guide‎ | ServicesandCampaigns
Jump to: navigation, search
This page contains changes which are not marked for translation.
Other languages:
English • ‎日本語
• 5.3 • 5.8

This section describes the campaign calling hours that are configured in the Calling Hours section of the Services and Campaigns Outbound tab.

Calling hours determine time intervals within which calls to specific destination phone numbers can be made. All hours defined in this tab are specified for the time zone of the destination number to be called.The system determines the time zone by looking up the area code based upon the numbers in your calling list. 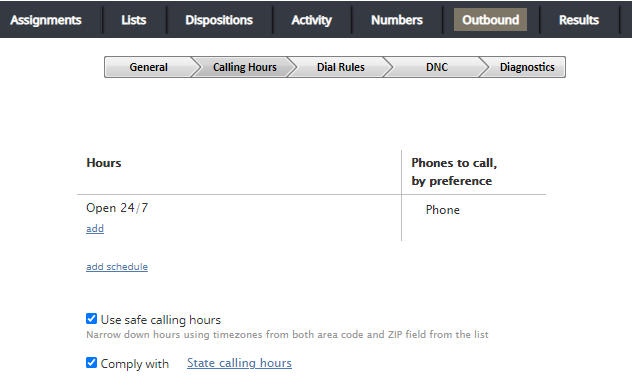 Note that specification of calling schedules is mandatory. That is, you must define a schedule even if the associated calling lists contain only one type of phone. Note also that the system does not check whether these hours fit within the general campaign’s hours of operation specified by Start/Stop Automation settings of the General page.

To define a schedule

To apply the schedule to a particular phone type

Note that the order in which phones of the same record will be called within the given schedule is determined by the order in which they appear in this list. You can change the original order at any time by dragging a phone type to a new desired location in the list.

For the USA, Canada, Mexico, Brazil, Russia, Indonesia, and Australia, the adjustment of calling hours for time zones of destination numbers is performed using area codes. For all other supported countries, adjustment is performed using the country code only. Thus, in order for any restricted calling hours to work properly, destination phone numbers must start with a country code. In other words, unless the campaign is set to be open 24/7, any numbers without a country code will be skipped. Note that a country code can be added to imported numbers automatically as part of the list import process.

For the list of countries for which the adjustment of calling hours is currently supported, see section Countries, Codes, and Time zones. Note that if a number in the calling list begins with a calling code that is not on that list, it will be dialed only if (1) the campaign calling hours for the corresponding phone type are set to 24/7, and (2) the Comply with State calling hours checkbox (see below) is not selected.

Without the Use safe calling hours option selected, the adjustment of calling hours for time zones of destination numbers is performed using the area codes only. If this option is selected, both the time zone associated with the area code and the time zone associated with the postal code is checked. If they are the same, this option does not have any special meaning. If they are different, calling the corresponding number will take place only during the “safe” window (i.e., when the campaign is open in both time zones).

Note: This setting currently works only for US zip codes.

Many countries impose restrictions on the hours when consumers can be called by businesses. In some countries, such restrictions may differ from one state/province to another. For information about configuring state- and nation-wide calling hour restrictions, see section State Calling Hours.

Select this checkbox if you would like to observe the configured State Calling Hours while making calls for this campaign. If this checkbox is selected, the country/state information of the calling list record will be checked against the configured hours, and the call attempt will only be made if the current day and time fit within the permitted calling window.

To review and/or change the configured restrictions, click the State calling hours link.