The Zendesk API Request scenario block allows you to make a free-form Zendesk API request to Zendesk using JSON, making it possible to take a variety of actions with your integrated account. The block uses your preconfigured Zendesk integration account for authorization and so forth. Note that the HTTP method is configurable and the returned results are processed the same way as they are with the Fetch URL scenario block. 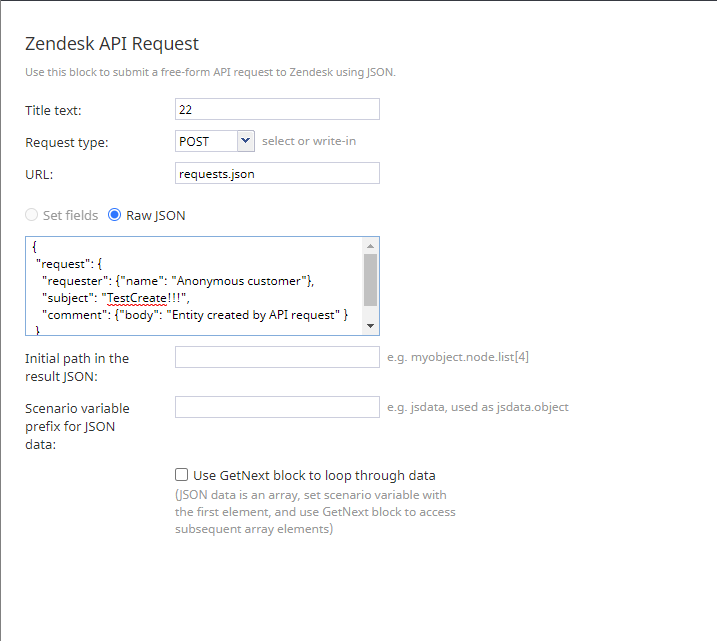 The Failed conditional exit is taken if an error occurred during the API method execution.

The No Data conditional exit is executed if no data is returned in the body of the HTTP response.

The name of the instance of the block.

The type of method to be used to retrieve content from the specified Zendesk URL.

Select from the following request types, or write in another method manually:

In this field, set requests.json in order to create an entity in Zendesk.

When this scenario block executes, it constructs a request to the Zendesk API. The block takes the integration account configuration URL https://<yourcompany>.zendesk.com and appends /api/v2/ and requests.json to it.

Where object properties are specified in JSON format.

Initial path in the result JSON

If the response body contains JSON, this setting can be used to save into scenario variables a specific part of the data. Example: myobject.node.list[4]. The default is "none"; the path starts from the root of the returned JSON.

This string will be used as the name of the variable to receive parsed JSON data. Note that if the initial path above points to an array, depending on the value of the following GetNext option, this variable would either contain the array or its first (and subsequent) elements.

Use GetNext block to loop through data

This box is selected if the JSON response data (at the initial path) is an array. The scenario variable will be set to the first element of the array and GetNext block could be used to iterate over the array elements, setting scenario variable to the next element.