The Email scenario block sends an email, with an attachment if so configured. It can be used together with the Record block to send recorded voice messages.

The EMail block may take the Mail not sent conditional exit, in which the message cannot be sent (if, for example, the SMTP server is down).

This is the display name of the email sender. A scenario variable can be specified as the value using the $(varname) format.

This is the email address of the email sender. A scenario variable can be specified as the value using the $(varname) format.

This is the subject line of the email. Can contain scenario variables in the $(varname) format.

This is the text to be sent as a message body. It can contain scenario variables in the $(varname) format. Bright Pattern does not impose any limits on the size of the email.

URL of the recording to attach

(Before Bright Pattern Contact Center version 3.7.7, a combination of the Record and Email scenario blocks were used to implement recording and distribution of voicemail messages. Starting from version 3.7.7, a new scenario block, called Voicemail, was introduced to combine the aforementioned functions and support various storage and playback options specific to voicemail.) 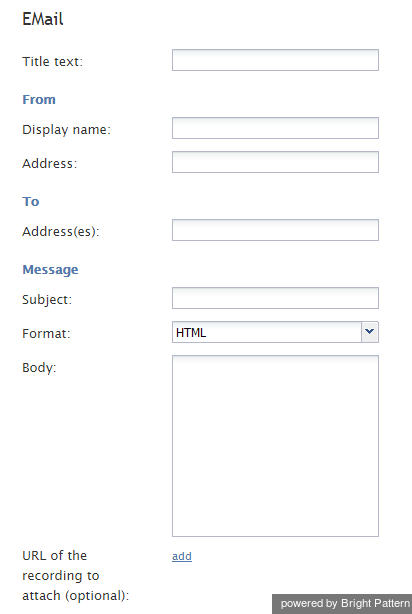 Retrieved from "https://help.brightpattern.com/index.php?title=5.2:Scenario-builder-reference-guide/EMail&oldid=8646"
ask community about this topic